We’re all familiar with the Adobe scandal by now. I received some emails from various companies stating my passwords had been reset. I have no problem with extra caution on the part of these companies – I even appreciate it. But this article from the BBC causes me some concern. Whereas the non-adobe company which reset my password stated people sometimes reuse passwords across different sites as the reasoning behind their policy decision to reset passwords of accounts with emails matching those found in the adobe booty stash, the above linked article states Facebook is specifically resetting passwords found to match email/password combos determined to have been compromised. The article then states the same actions are occurring at other companies. Something is wrong here. I never use the same password twice, yet my password for an undisclosed website was reset, so I figure one of three things is happening here:

So in closing, don’t reuse passwords, close your Facebook account, use open source software alternatives to adobe products, and don’t drink the water 😉

Yahoo sucks worse than ever

Trying to create a Yahoo account but they insist on a valid mobile number to create an account. I do not have a mobile number and wouldn’t give it to them if I did. Guess they’re not overly concerned with gaining new users… Yahoo, you JOKE! do you really think you’re relevant as it is? Thanks for nothing.

Intelligent Devices, the Internet Of Things. Oh so futuristic. Oh so potentially worrisome… I only hope our dreams are fulfilled and not our nightmares.

The 20 Most Useless Websites Ever

A List of Useless Webpages by APPA THE GYPSY

Believe it or not, Appa found ANOTHER 20 Useless Websites! PART TWO!!

Ok, so you are going to get to the end of this post and seriously wonder how I found all of these webpages. Some of them I just knew about. I asked people about pointless webpages, and they told me about some that they knew about. And at some point I just started googling random stuff, and that’s how I got the rest. But, believe me, the internet is full of way more useless stuff than this.

You can see what got me onto the train of thought that led me to this post, can’t you? This website tells you if it’s Christmas or not. One day a year, the website says “YES”, every other day, it says “NO”. Useful if you’re Santa…

Near the beginning there was Darkness. Owned Shadows.

When I first looked past the windows and saw the light,

I noticed some sweet looking fruit hanging in the walled garden nearby.

I observed this fruit and thought it sweet,

and I ate of this fruit.

And it was sweet.

When I realized the fruit which grew in the walled garden was no longer sweet,

but rather was sour and rotten,

I set sail for the Icy shores where Penguins play

and have never looked back since.

UPDATE: Site seems to be working at this time, so perhaps those responsible for running the site have corrected their error (?). Hopefully…

The representative I spoke to on the telephone assured me that the treasurydirect.gov website had not been hacked, but Firefox seemed pretty sure something is amiss. 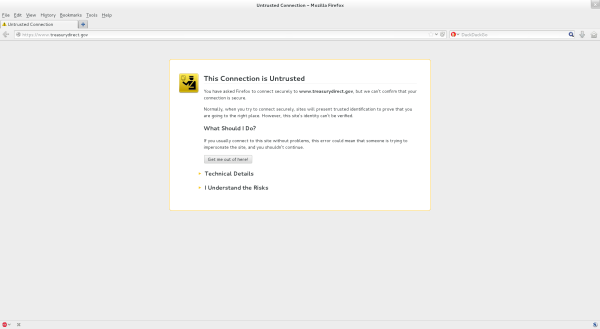 The representative I spoke with on the phone said there is a known issue using Safari which will result in a similar warning message to users, but that my report is the first he has heard of this warning being present in Firefox. [Thank God he didn’t suggest I try using Internet Explorer or I would have closed my account on the spot!]

There seems to me a good possibility there has been no hack here and the government/treasury [not the same entity!] is so careless they just don’t care about presenting trusted certificates. As a consumer of treasury goods I, however, care a great deal that I can trust the connection to my money. With the recent headline grabbing attacks on the NY Times, Amazon, and the rest, perhaps this is an attack on the treasurydirect.gov site? How the hell can one tell if they admit they have certificate issues on good days?!

Perhaps I ought to close that account anyway if this is their approach to online security.

Why do we tolerate this?

When I built a computer from parts purchased online I didn’t think too much about the packaging with the motherboard stating Windows version blah blah blah would be required. I know better. I installed Fedora from the Live CD and never looked back. My primary, home-built, computer has never smelled the stench of Windows, and it is honestly the best computer I’ve ever had the pleasure of using.

But today I purchased a keyboard to replace the one I had with my Dell XPS 420 for the past half decade (don’t eat/drink and type, duh) and I’m looking at the box and the damn thing actually states as a system requirement Windows version blah blah blah.

Just to make sure I wasn’t missing something, I plugged it into my (sadly discontinued) 24 inch iMac. It works fine. Had to press all of two buttons and one click on the keyboard recognition dialogue, which ran upon booting with the new keyboard attached, and it was recognized and functioning perfectly (as long as I remember the Windows/super key is the Command key). No windows installed there. Then I plugged it into the Dell machine – which hasn’t had any windows installed since I wiped the drives clean with Parted Magic and began using the machine as an OS experimental machine. Currently running Linux Mint 15 and ArtistX (Ubuntu with tons of creation applications pre-installed if you haven’t heard of it before), the keyboard is somehow managing just fine despite the absence of the aforementioned pre-requisite systems…And I didn’t have to do a damn thing to get it set up. Just booted and started typing.

So next I looked at the manufacturer of the keyboard – which is not (at least not explicitly stated to be) Microsoft (which would at least make it understandable, if still wrong, to say a Microsoft owned operating system is required to use the product). It’s a Dynex keyboard, and according to Wikipedia (I can actually say that with a straight face, unlike some years ago when it was a laughing stock of mis-information) Dynex is a Best Buy house brand, which is consistent with the fact I purchased the keyboard at Best Buy.

So the real question is: Why would Best Buy (Dynex) include a verifiably false statement about their products on the packaging of said products? I doubt very much they would of their own accord… Which leads me to believe somewhere in the depths of hell there is some agreement, probably greased along by the universal lubricant of shady dealings, between Microsoft and Best Buy (and damn near every other supplier of hardware in the universe), the terms of which require these suppliers to lie to customers about their products’ so called requirements.

This is of course nothing new – in fact this story is so old it’s almost not worth rehashing… Except for the fact it is still happening! Why on earth do these companies still show such deference to Microsoft? Would the survival of these companies really be in jeopardy if they were to call off such arrangements with Microsoft and say “No. We’re not going to be including that ridiculously false statement on our products, which are compatible with nearly (if not) all operating systems.”? Maybe their survival is at stake; I don’t know. It must be for them to continue to behave so otherwise irrationally.

It’s a fucking crime what Microsoft gets away with.