What do you mean it’s not real news?

Congress for the New Urbanism

Wish I could be there. Maybe next year…

PlaceShakers gets put on ice this week as we, together with most of the urbanists we know, head to West Palm Beach, Florida, for CNU 20: The New World, this year’s installment of the annual Congress for the New Urbanism.

Will you be there?

As summarized by the CNU, “The New World confronts the challenges of peak oil, climate change, and growing wealth disparity, along with worldwide adjustments in the financial, housing, retail, transportation, and energy markets. Taken collectively, these challenges are drastically changing how we do business in the 21st Century, and opening new opportunities for the New Urbanism.”

This comes on the heels of last year’s Congress, where Next Generation urbanists brought fresh ideas and approaches to the wet blanket malaise of the sagging economy. Scott Doyon wrote about some of them in advance of the gathering while Howard Blackson followed up with a post-game analysis

Today we will discuss some of the deeper implications of common and advanced mathematics. We will start with some basic assumptions, shattering them to pieces, before moving on to advanced themes.

Whoa! We’ve just been stabbed in the back by our former friends one and two, who we thought we could count on, in good times and bad, to be just who we always thought they were, but here we see they have been fooling us all this time. They’re completely interchangeable! This throws the whole entire number theory right into the garbage disposal!

Or it presents a pretty compelling reason, other than the whims of your math teacher and her text books, why you’re not allowed to divide by zero (or any variable not explicitly stated to be not equal to zero).

Considering the average human walks at a rate of about 3 miles per hour, and marathon winners complete the 26.2 mile run in about 2 1/2 hours, which is equivalent to running roughly 10 miles per hour, would it be faster for me to walk 10 miles or to run 10 miles?

Think about the question before rushing to answer. You don’t want to miss easy questions like this on any upcoming exams you may have because you failed to understand the question being asked. Do you have your answer?

Okay. Here is the correct answer: It would, without a doubt, be faster for me to walk the 10 miles. Despite being a good distance walker, I am out of shape, and attempting to run the 10 miles would result in extended delays whilst I, lying prostrate on the sidewalk, waited for emergency medical services to arrive and attempt to resuscitate me. They would most likely then bring me to a hospital, or morgue, depending on the relative success, or lack thereof, of their previously stated efforts, which would result in further, possibly infinite, delays. So you see, the wording of the questions on your exams is crucial. Never rush to answer a question without fully reading and understanding every word in the question.

You say the question was unfair because you don’t know me or the status of my health? Well that’s your fault. You should have done your homework!

Ok, here’s a quick way to cut the fat (and repair the economy):

Fire the politicians! ALL OF THEM!

Thank you and have a nice day. [No, you don’t need to pay me, I love my work. Thank you anyway.]

How to fry tree bark.

So big government is bad. Check.

POTUS is supposed to be creating jobs to revive the economy. Check.

Creating a big huge federal FDR style program to convert the dying automobile industry into an American High Speed Rail train producing system, and taking the trillions being spent overseas to protect our Asian border and using it to build a national network of high speed rail lines (along with revamping the American infrastructure, including de-suburbanizing the landscape) would be bad (=big government). Check.

Oh right, cut all taxes for the wealthy. Check. (Because this has been working so well since the Reagan administration…)

Whoops… I meant moving on!

Anyway, to refocus on the positive things going on these days, check this out:

Well, I can’t seem to find anything good going on out there, so pardon me while I make a little good of my own in this space:

What the hell is wrong with you?

Just a quick note to share this gem I found earlier today:

Have a great weekend!

That’s what I’m talking about!! 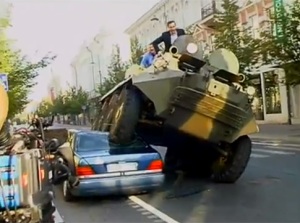 Now this is what I’m talking about folks!

Down with the automobiles!

On a more serious note, terrorism continues in the United States Congress as the Tea Baggers continue to employ their slash and burn philosophy of disassembling the Republic from the inside out. May a swift meteor strike save us all…

Let’s sap the poor, and those greedy seniors!

Because taxing the rich is unacceptable.  Just another thing that pisses me off.

Here’s another one: You may have heard this story in the media. Young boy killed by drunk, high driver (the destroyers of the universe even when they’re sober, don’t forget!) and the mother was facing a longer sentence than the drunk driver because she was jay walking. Damn that pisses me off. How do you give a drunk driver who kills someone (even if they were jaywalking) a six month sentence? Even if he killed no one there’s no excuse for drunk driving. Automobile dominated civil engineering and racism combined here to create what I find to be an infuriating situation. Thank goodness the judge spared this poor woman prison time.

While we’re on the subject of stupidity: WTF!?

A brief pause to address those of you who might sight the hypocrisy of calling out stupid while quoting from the NY Daily News: Shut up, please. It’s my easy reading paper of choice… and it’s free on my mobile device, whereas that other great NY paper whose name I can’t recall at the moment charges something like a dollar a day… I’m entitled to a free mobile paper!!!!! It’s 2011 for Chrissakes! I don’t want to pay for stuff like this is still the 2nd Millennium.

Besides, if the House Republicans continue their quest to legalize cannibalization of the poor by the rich, I’m going to need every cent I have to finance my survival. No money left over for charity, arts, being a good consumer, none  of that stuff. I’d even like to see a general boycott of consumerism for at least three months, especially if these ass-clowns screw this budget thing up. Everybody just stop buying stuff. Let’s tank the economy in  a stunning public economic suicide. Hoard every dollar you have. Damn, you have no idea how badly I’d like to see the entire capitalist consumerist corporate commercial  just-keep-shopping-till-you’re-dead system just blast a giant, runny fart all over the khakis of the smug elite. Even if it hurt us all in the end, I’d still love to see it. Damn, you just have no idea…

Might actually be a good thing since we don’t produce sh*t anymore anyway. Might even close the trade imbalance since all the crap we’re buying is made somewhere else… Here’s something that isn’t relevant (or is it…)

I think that we are collectively involved in a wrong war. I’m not talking the middle east here (save that one for another post!), I’m talking about the war in NYC between bicyclists and pedestrians. It’s been going on for some time now, with flare ups interspersed between coldwar-esqe lulls that never mean peace but aren’t quite war. And I have two major quarrels with this war. They are really one and the same, but I need some substance here so bear with me.

My first quarrel is one of general principle. When we, the citizens of this fine city (if you don’t live here that’s fine too, just keep bearing with me – the relevance to your life is coming soon) engage in this war, we are participating in the downfall of humanity via that well trodden path known as Divide and Conquer. Of course we are on the receiving end – i.e. We are not conquering anything, we are actively participating in our own defeat. Stay with me here, this is important if you want to fully grasp my point. God created Man, and gave us feet to walk on. And Man created bicycles, so, indirectly, God created bicycles. But, and here is the important distinction, automobiles, and the entire suburban culture, are products of the devil, in the form of giant, evil corporations and the cold war era fear of nuclear annihilation (whereas feelings about nuclear annihilation today, by those who still think about such things, are different – generally an almost fatalistic, even optimistic, view that whether or not we blow the world to smithereens, it has to get better than this). Don’t argue with me or try to persuade me with contrary facts – I know what I’m talking about here!

Now the real enemy of both pedestrians and bicyclists is, obviously, cars and their drivers. Think about it. If they’d stop bringing their big stupid vehicles into town, the streets would have plenty of room to accommodate both pedestrians and bicyclists. (Anybody who dares to bring up even the slightest flaw in this logic will be mocked mercilessly and then beaten into obscurity with an “I can’t hear you” stick!)

Now, this brings me to my second issue. The fault of this whole situation clearly lies with city management (they’re trying to conquer us!!! – ok, maybe not really. Maybe…). I won’t harp on too much because the mayor appears to be baby stepping in the right direction, but I’d really like to see a communist style redistribution of wealth, applied, of course, to the wealth of moving-around space in this city. Get the cars the hell out of here and let’s see some better resource management!

Have any of you ever taken a good, close look at some of the lane dividers painted on our streets? Or taken a civil engineer’s eye to some of our less perpendicular intersections, particularly in the outer boroughs? I don’t think anyone from the city has either… It’s a miracle more people aren’t killed on these streets every day, whether they’re walking, biking, or participating in the destruction of all life on earth by driving a car.

Oh, and if you really want to get in shape, you should probably get your fat ass out of your car and walk a little!